BELOW ARE SOME STORY IDEAS TO GET YOU STARTED ON YOUR COMIC CREATIONS. FOR EVEN MORE CREATIVE IDEAS GO TO SOMETHINGTOWRITEABOUT.COM AT RIGHT. 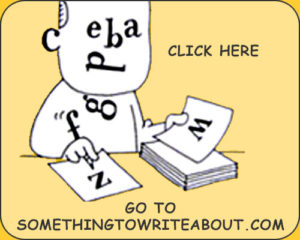 Select a character to represent you and speak for you as you talk about yourself, your life story and your interests. Introduce yourself, talk about who you are, what you do, what you're interested in, what you like or don't like. If you came from another country, tell us where you're from and what your life was like. Perhaps you'll also want to use other characters in your comic strip to introduce family members or best friends. In your comic strip have the character talk or think about the important parts of your life that you want to share with others.

Travel to A Mysterious Place

MAKE BELIEVE you could travel to a mysterious land, planet or star. What is your character thinking or saying as it begins traveling on its trip – such as its hopes, e

xpectations? What strange things or creatures does your character see or encounter in this mysterious land? Have your character comment on what it sees or encounters or engage in a conversation with a person, creature or animal it encounters. This can be in the form of greetings, dialogues, jokes, questions, or have the mysterious creature talk about its life. Have them react to one another – for example, they can comment on their appearance, they can talk about their favorite foods or customs. They can talk about real life concerns, too, such as living with bullies, loneliness, loss, problems on their minds.

MAKE BELIEVE you could have three wishes come true. What would they be? Select a character who makes a wish. In a talk balloon, have your main character explain to another why this wish was made and what it means to him or her. You can have this other character react to or comment on the main character’s wish selection or even express its own wish that it would like to see come true.

A Day at Work

MAKE BELIEVE that you're at the office. Your boss is talking to the staff and you have the power to read the hidden thoughts and daydreams of your co–workers as the boss speaks. Choose a character to be the boss who is speaking to office workers. What are his or her words? Place thought balloons over people’s heads and in them write their secret thoughts or place the image that corresponds to their thoughts. If you wish, you could also use talk balloons to have office workers respond to the boss’ words.

A Day at School

MAKE BELIEVE that you're in school. Your teacher is talking to the students in your class, and you have the power to read the hidden thoughts and daydreams of your fellow students as the teacher lectures. Choose a character to be the teacher who is speaking to students. What are his or her words? Now, what is going on in students’ heads? Place thought balloons over students’ heads and in them write their secret thoughts. If you wish, you can use talk balloons to have students respond to teacher’s words.

MAKE BELIEVE you could tell a beautiful love story. How would it go?

MAKE BELIEVE you’re retelling a favorite fairy tale. How would you change the story?

MAKE BELIEVE you could write a poem or sing a song to someone. What are the things you’d want to say? Who would you say them to, and how would they react?

MAKE BELIEVE you could speak to someone you thought was lost to you forever. What are the words you would use? How would that other person react?

MAKE BELIEVE you thought of the words to heal all people. What are the words your character would use?

MAKE BELIEVE you could throw the most fun party in the world. Where would it be? Whom would you invite? Or, maybe your party turns into a disaster. What happens?

MAKE BELIEVE you could defend yourself effectively from a bully or someone who acts badly to you. What are the words you would say to this person? What comeback would you have after someone tries to embarrass you?

MAKE BELIEVE you could be bold and brave for a day. Just what great deeds would you do? How would you change?

MAKE BELIEVE you could transform yourself into the person you always wanted to be. Who would that be, and what would that person be like?

OTHER IDEAS FOR YOUR COMIC STRIP STORIES: HOW ABOUT