How to Help Your Child with Autism Communicate Using Comics 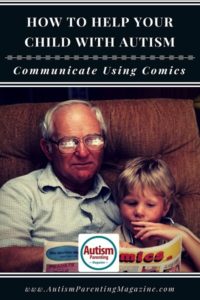 For a useful article on how comic strip generators like MakeBeliefsComix.com are used for students with autism, please read this article in SpecialEdConnection®

And read this new article, ‘’How to Help Your Child with Autism Communicate Using Comics,’’ written by Bill Zimmerman, creator of MakeBeliefsComix.  The article appears in the August 2018 issue of Autism Parenting Magazine at:  https://www.autismparentingmagazine.com/help-child-with-autism-communicate-using-comics/

There also is a lesson plan on using comix in teaching children with autism.

MAKEBELIEFSCOMIX FOR CHILDREN WITH AUTISM

Here are some examples shared by people who use MakeBeliefsComix to help children on the Autism Spectrum.

"As the mom to a little boy with autism, I just wanted to thank you for your free MakeBeliefs Comix. I don't know whether you know much about autism, but in very general terms, lots of these kids are extremely visual learners and they are a bit blunted in their ability to recognize how others around them are feeling.

"I use PowerPoint to make little 'social stories' for my son... on a regular basis, as I've found that humor and visuals can really reach him.

"Sometimes my little stories are about not leaving the backyard...other times, they introduce new vocabulary words and are about cowboys whose horses get stolen so they are reduced to riding cows! Whatever is needed, I produce.

"At any rate, a friend just recommended your MakeBeliefsComix site and it's like Santa came early! The fact that the characters look charming, one can customize the conversations, AND that there are various emotions shown make this a site I'm going to recommend to all my fellow special needs parent friends.

"It is so excellent that you can choose the emotion/facial expression of each character. Cole's teacher starts every day with their Emotions Board, where students tell how they feel and move that icon to their 'In' box on the wall. When one of them gets frustrated, the teacher asks the child how he is feeling and may ask the other kids how they think he's feeling. Then he moves the 'frustrated' icon to his 'In' box. When he chills back out and feel happy awhile later, they comment on how happy he looks and he runs to move the 'happy' icon. They practice making various emotion faces every day, too, but make it fun. This has really helped Cole in looking at other people and reading their feelings. That comic strip is just the perfect tie-in! Thank you!" -- LeAnne Cantrell, Mandeville, Louisiana

(In a later interview, Ms. Cantrell spoke about how the different facial expressions and moods shown in the MakeBeliefsComix characters' faces led to a breakthrough with her son Cole: "I sat with Cole for several months in front of the computer showing him how the words 'angry', 'sad', 'worried' matched the characters' facial expressions. Today, Cole can express his feelings verbally without acting out. This is a huge breakthrough for me to have him talk about what he sees and feels.") MakeBeliefsComix has also added a new *Autism/Spectrum category* in our printables section. Its intent is to help children with autism identify different emotions as well as draw them on faces.

Ms. Cantrell's remarks reinforce the value of comics in supporting children with autism who learn visually, in building an understanding of emotions and in developing comic strip stories, or scripts, to help children learn and prepare for activities and engagement with others. For example, a parent sitting down at the computer with a child can create a three- or four-panel comic strip that shows two people greeting one another and then filling in talk balloons with text that suggests what a conversation might be like when two people first meet and interact. This could include such things as saying "hello" to each other or asking "how are you?", and introducing themselves to each other. You can build all kinds of stories to deal with other subjects, such as discussing the different emotions we have in different situations and how to express them, as well as interacting with people in the community or at school, even dealing with a bully. Creating comic-strip stories can help children better understand how to handle themselves in different situations, some of which can be distressing to them at first but which, in time, can be mastered through building visual stories that help explain the situations more clearly and the path for negotiating them.

MAKEBELIEFSCOMIX FOR CHILDREN WITH AUTISM

"I do not know if hearing emotion in another's speech will necessarily teach a child with autism to understand emotions. I have found it to be more helpful to give a label to the emotions the child is displaying (to give him a name for the emotion, e.g., 'I can see you are mad/frustrated') and then showing him a better way to express that emotion (if there is a problem)... However, I would encourage whatever works!"

For a useful article on how comic strip generators like MakeBeliefsComix.com are used for students with autism, please read this article in SpecialEdConnection®.

SUBMIT YOUR OWN STORY! (https://makebeliefscomix.com/Feedback/) We want to hear how using this site helps people with different abilities. Please include your name, affiliation, city and country.

AND TRY OUR NEW LESSON PLANS SECTION We've just added this new section to give you some ideas of how other educators are using MakeBeliefsComix.com in the classroom. Lessons are included for language comprehension, for Teachers of English to Speakers of Other Languages, for foreign language instruction, and using comics to help children with autism.

There is another Teacher Resources page on this site which offers 26 additional ideas on how to use MakeBeliefsComix in the classroom. Please give it a try, too.