WANT YOUR CHILDREN TO DEVELOP THEIR IMAGINATIONS, as well as a fondness for reading and writing and telling stories? Then encourage them to create their own comic strips. 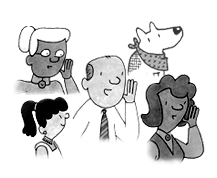 My own love of comics and understanding of their value as a learning tool began when I was a child. Back then, the very best day of the week was Sunday mornings when my dad left home early to bring back an armload of newspapers, all with their glorious color comics sections. The funnies were my paradise. I'd spend the morning going over each strip, following the adventures of my favorite characters, even flying in the sky with them. I'd look at the dazzling illustrations, be drawn into their colorful worlds and be challenged to decipher the letters in the white balloons coming from the characters' mouths or floating above their heads. And with help from my father, I'd try my best to sound out the words in the talk balloons and make sense of the stories they told.

Comic strips provide a perfect vehicle for learning and practicing language. Each strip's three or four panels provide a finite, accessible world in which funny, interesting looking characters live and go about their lives. And children with limited reading skills are not as overwhelmed in dealing with the size of a comic strip as they may be with a book of many pages.

Comic strips also don't require long sentences or paragraphs to tell a good story. Only a few words are required for the characters to go about their lives and reveal their stories. And, anyone who sees a blank talk or thought balloon floating over the head of a character wants immediately to fill it in with words and thoughts; doing so is the beginning step to telling a story.

Comics help children learn how to read and think imaginatively. The comic characters can became their friends and family, and they began to realize that reading can be fun and open up new worlds to them. By giving children a choice of fun animal and human characters with different emotions -- happy, sad, angry, worried -- as well blank thought and talk balloons to fill in with their written words, and some story prompts to spark ideas, youngsters will be able to tap into their creativity to tell stories and create their own graphic stories.

The best educators understand that playing is learning. Parents and teachers can use the process of creating comic strips to encourage youngsters to practice language, reading, writing, and communication skills. For those who teach young and old how to read and write or to learn English as a second language, comics can be an invaluable tool in achieving these objectives.

A parent or teacher, for example, could put together a comic strip with characters and blank thought or talk balloons, print it out, and ask children to fill in the balloons with words and narration. Better yet, a student can choose his or her own characters and develop stories alone or with a partner. Educational therapists who work with deaf, learning disabled, and autistic youngsters, as well as trauma victims, also use comic strips to help their clients understand concepts and to communicate.

Comic strips are a great way for students to practice new vocabulary words and to practice dialogue in different situations. A child, for example, who may be having trouble with another child at school can use the comic to come up with words and actions to help him deal with this problem. In effect, the comic characters can serve as surrogates for children to work out different problems. And, by creating comic strips together, parents and children learn how to work and communicate more effectively with each other to create something new and imaginative.

A child reading a novel or short story, could also storyboard the stories in comic strip form, or keep developing the story after the book ends. A comic created can also be the beginning of a much longer written story, too.

Here are some ideas for comic strips:

After creating their own comics, children can print out and color them, and if working online, email them to a friend or relative. He or she can also use the comic strip to create personalized greeting card stories for family and friends and to celebrate special times in their lives. Wouldn't you like to receive one on your own birthday or when you're in need of cheering up? In creating their own comic strips children can practice their language skills, express their feelings and imaginations, and have fun as well.