By Sylvia Guinan on The WIZIQ Blog 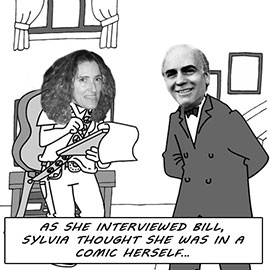 It was a great pleasure to interview Bill Zimmerman for last week’s webinar on Creative Comic Collaboration For Fun Fluency development.

Bill is the mind, heart and soul behind MakeBeliefsComix.com

I’ve been exploring comics websites and creating all kinds of different comic lesson plans for the last few years. This year I’m going into comic-style educational publishing. My children are writing their own comic stories and I’m planning my own educational comics for language learners.

But why all this fascination with comics?

Watch my presentation and study my slideshow to find out.

In the meantime, for every fascination there must be an initial inspiration. Although I’ve been aware of the educational significance of comics for many years, it was only when I went online that I got to explore it in more detail and be more creative in this medium. However, Whatever I did and no matter how many comic websites I explored, I kept coming back to MakeBeliefsComix for reasons that I outline in my talk and demonstrate on the mini-interview depicted on the slideshow.

I really wanted to talk to Bill Zimmerman about the comic site that has inspired me so much, and I was thrilled when he agreed to do this interview.

1) Do you have a personal story behind the building of the MakeBeliefsComix website?

My own love of comics and understanding of their value as a learning tool began when I was a child. Back then, the very best day of the week was Sunday morning, when my dad left home early to bring back an armload of newspapers, all with their glorious color comic sections. The funnies were my paradise—I’d spend the morning going over each strip, following the adventures of my favorite characters, even flying in the sky with them. I’d look at the dazzling illustrations and be drawn into their colorful worlds, and be challenged to decipher the letters in the white balloons coming from the characters’ mouths. And with help from my father, I’d try my best to sound out the words in the talk balloons and make sense of the stories they told. I grew up in a very chaotic, dysfunctional family and the comics provided a safe haven for me where I could escape and enter the world of my imagination as I gazed on the beautiful pictures and put myself into them. As a young boy, I remember reading comic books all the time, even at the kitchen table when dinner was served. They provided the escape I needed to survive.

Many years later, as a newspaper editor and as an author (see www.billztreasurechest.com), I began working with cartoonists to create illustrations that would enhance the written words. Visuals always made it easier to understand complicated material. And for my newspaper I even created a newspaper comic book series to teach youngsters history and current events.

About 10 years ago when I started teaching students of English as a Second Language, I thought that building a web site where they could start creating their own short comic stories would encourage them to write and read more. Comics provide a finite, accessible world in which funny, interesting looking characters live and go about their lives—and the best educators understand that playing encourages learning. Ever since childhood I have always believed in ‘’make believe’’ and decided to call the site MakeBeliefsComix.com, a place where visitors would be encouraged to use their imagination and express themselves.

2) Of all the comic websites I’ve seen, yours is the only one which covers the emotional development of learners and which provides so many lesson plans and books. What role do you think that emotional intelligence plays in the language learning process?

Much of my work in spurring students to write is to help them tap into the memories and deep feelings which feed and nurture them. I know that my own childhood memories, and the emotions associated with them, have provided the raw stuff for most of my books. By encouraging students to recall their past, teachers help them reveal the great richness of their lives. From the stories they write about their lives and then read in class, we learn from these writers that they are a lot more than just students who are trying to improve their English skills. We recognize them as full human beings with a history behind them and a future ahead. They are worthy of our respect and deserve to be heard.

Encouraging immigrant students to write, whether comic strips or short pieces, is also important because it helps them better weather the enormous stress they experience as they learn their hard-won English language and adjust to life in a new land far away from their original homes. Students have told me that they often feel overwhelmed by the pressures of adjusting to a new life and try to hide their feelings, keeping them locked inside. Not good – we all know what bad things happen when you keep things in. We also know that writing enables us to find some release and hope and take pride in our lives. As someone who was very shy and verbally inarticulate as a child and who had difficulty making my voice heard, I remember the power I felt in being able to express my ideas on paper and be read by others. Even today, I’d rather write than talk.

3) How does your comic sites help those with special needs, autism, or even dyslexia?

The way MakeBeliefsComix.com helps students with special needs is to offer them a simple tool to create stories that express how they feel about the world and to communicate what is inside of them. Youngsters respond well to the site’s many fun characters, each of whom shows four different emotions. They will enjoy the empowering experience of using the computer to build, within minutes, a comic strip right in front of their eyes and take pride in having successfully created short comic stories. Making comics is also an activity that teachers can enjoy doing with their students. By encouraging students to create their own comic strips or books, teachers also help students find a “safe haven” in the world of their imaginations.

Developing comic strip stories, or scripts, can help children with autism build an understanding of emotions and teach them how to engage with others.

For example, a teacher or parent sitting down at the computer with a child can create a three- or four-panel comic strip that shows two people greeting one another and then filling in talk balloons with text that suggests what a conversation might be like when two people first meet and interact. This could include such things as saying “hello” to each other or asking “how are you?”, and introducing themselves to each other. You can build all kinds of stories to deal with other subjects, such as discussing the different emotions we have in different situations and how to express them, such as interacting with people in the community or at school, even dealing with a bully.

Creating comic-strip stories can help children better understand how to handle themselves in different situations, some of which can be distressing to them at first but which, in time, can be mastered through building visual stories that help explain the situations more clearly and the path for negotiating them.

4) How can storytelling through comics develop creativity and fluency?

Students with limited reading or writing skills are not as overwhelmed in dealing with comic panels as they may be with a book of many pages. Comics don’t require long sentences or paragraphs to tell a good story. Only a few words are required for a character to go about her life and reveal her stories. And who can resist seeing a blank talk or thought balloon floating over the head of a character and not want immediately to fill it in with words and thoughts? Doing so is the beginning step to telling a story. In a comic strip, anything can happen – animals can speak, humans can fly, cowards become heroes, new worlds can be discovered. By being encouraged to use their imaginations to create stories, students become freer in spirit and become more creative in expressing themselves. People who feel freer also become more fluent in using language.

5) What’s the idea behind using comic characters as surrogates for self-expression?

In building MakeBeliefsComix.com, I wanted to provide students with a magical world of interesting characters with whom they might want to engage in creating stories. I decided that some would be human and some would be animals or creatures with human characteristics. I think using these characters to express our ideas and feelings provides a safe way for students to say what is deep inside them. Somehow, it becomes easier to allow a character to speak for me and articulate my wildest thoughts than it is for me to express them directly. It is like an actor who becomes the character in a play and by doing so, feels permitted to explore new parts of his or her personality that may have been dormant.

6) What advice would you give to teachers who want to start teaching with comics?

I’d like to throw out a challenge to the teachers to experiment and set aside a 20-minute period at the end of each school day when kids are encouraged to create a daily comic or comic strip of something they learned or read or experienced or imagined that day. They can do this with a comic generator or by having students use paper and pencil. Maybe their comic is a new ending for a book they read, or an exploration of a character in the book. Maybe it’s a concept they learned in science or in social studies. Maybe their comic depicts a conversation they overheard or a joke a parent said to them recently. Maybe it’s a comic strip in which they utilize new vocabulary they learned that day or even about a problem they are trying to work out, such as how to deal with a bully. So over the course of a school year students build up an art portfolio or book of the many things they learned and experienced—something they can keep all their lives.

By creating comic strips, even with stick figures or with pictures cut out from magazines, students will realize that they can create stories and make art. They will learn that they, too, are capable of generating their own learning materials, their own memoirs, and that their “take” on the world is so very special – everyone sees things differently. Moreover, the process of using drawn characters and writing words for them to say or think provides a way for students to digest and integrate the key material that they are taught each day in school, as well as to reflect on their life experiences.

In conclusion, I second Bill Zimmerman in daring teachers to experiment with fun comic-style lessons and empower students to develop unique creative forms of self-expression in the target language. If you want to learn more about my thoughts on the importance of social and emotional learning via comics and other art forms, please read my previous article about creating safe, happy learning environments.

Special thanks to Bill Zimmerman for making such a difference in education and working tirelessly to provide free inspiration to teachers, students, and parents around the world.