In an increasingly social media–driven world, school library media specialist Cindy Symonds sees herself as the personal tech guide to the teachers and 560 students at Round Top Elementary School in Blythewood, SC. One media tool she’s recently introduced is interactive comic strips. Her students have been creating stories using the comic generator MakeBeliefsComix.com.

With perpetually limited funds, librarians and teachers are turning to the growing number of free make-your-own-comic websites and apps. These allow students to create their own characters, settings, dialogue, and stories. In particular, they seem to be stimulating literacy, communication, and linguistic skills among students with special needs. Often, they improve such students’ attention span and increase their class participation. 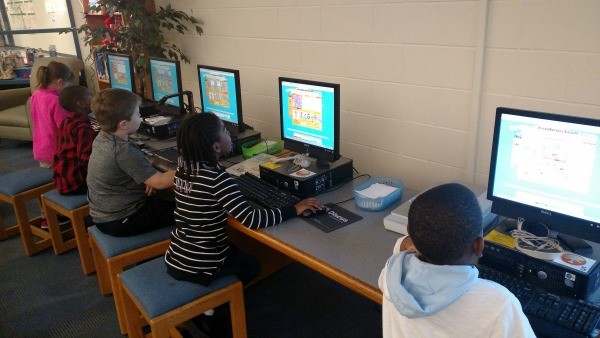 First graders at Round Top Elementary learn about the stages of a story using MakeBeliefsComix.com. Photo by Cindy Symonds.

One of Symonds’s former student, “Frankie,” now a ninth grader, says, “I like comic books a lot…I’m a huge Star Trek fan. These sites help me to get my ideas down on paper. I have bad ADHD, and the comic generators help me organize my thoughts.” His English teacher, Anna Howard, reports that since Frankie has begun working with digital comics, she’s seen growth in his language skills.

“With special needs learners in particular, it’s important to tap into their interests as a way of connecting new learning with the old,” Symonds told SLJ. “Our students are using a higher order of thinking skills to create new ways to demonstrate their learning.” 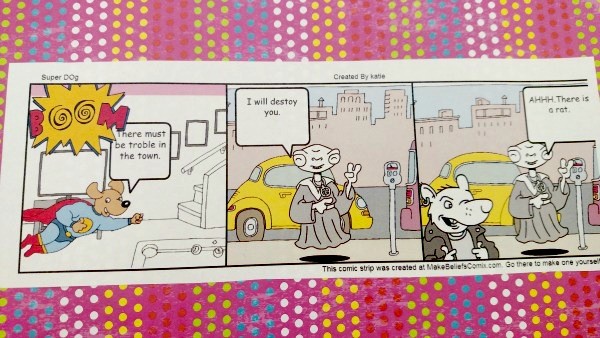 Comic strip created by one of Symonds's students

Fifth grader “John,” who has mild autism, used MakebeliefsComix.com to make a comic around the theme of “What you should and should not do.” Symonds notes that John relishes using comic characters to express his emotional and behavioral outbursts—while learning to keep them in check.

ESL students can also use MakeBeliefsComix.com, as the free site allows text to be written in seven different languages. Comics can be printed or emailed. In addition, the site offers hundreds of printouts, free interactive e-books with writing prompts, and lesson plans for teachers.

Symonds, who is president of the South Carolina Association of School Librarians, observes that challenged younger students can successfully express themselves through text in cartoon balloons. While she has the most experience with MakeBeliefsComix.com, she also suggests Kerpoof, GoAnimate, StoryBoardThat, Storybird, and Voki. “All these sites give teachers flexibility for individual struggling students.’’

At the Bronx Urban Academy of Letters, in New York City’s South Bronx, more than one third of the students are special needs, and English teacher Lauren Fardig-Diop introduced comics into her lesson plans. “It’s an effective tool to manage classroom behavior and learning issues.” One of Fardig-Diop’s most troubled students struggled with anxiety and low self-esteem. “Working with digital comic strips, she developed a serious interest in drawing. It helped her interpersonal skills and reduced her visits to the pass room [suspension].”

Donna G. Baratta, library media specialist at Mildred E. Strang Middle School in Yorktown Heights, NY, observed growth in her seventh graders’ interest in both reading and technology after being introduced to digital comics. “They loved the creativity. It brought a fresh perspective to their social studies classes. Creating comics about Valley Forge, Lexington, and Concord gave them a new outlet for their writing. It allowed them to think outside of the box and do something different from anything they had done in the past.” 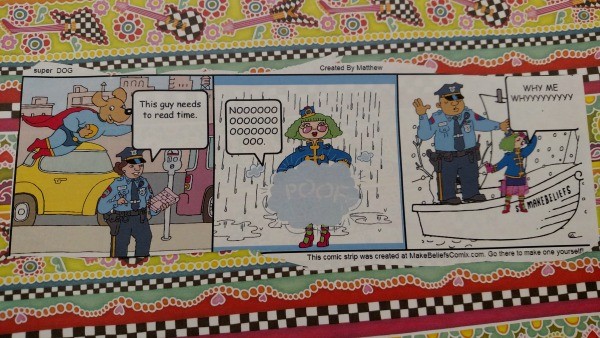 Another comic strip created by one of Symonds’s students

At Columbia Middle School in Sunnyvale, CA, MakeBeliefsComix.com appears in the lesson plans of special education teacher Sharon Eilts about three times a week. “Sean,” a 12-year-old with mild autism, expressed deep anger through his strip. “He used a three-cell comic strip using an alligator character’s speech bubble to say what kids were saying to him,” says Eilts. She realized Sean was being bullied, and notified the school’s administration.

After been placed in different classes, Eilts witnessed a huge change in Sean. “His trust level improved, and he began to communicate his feelings, something challenging for most kids with autism.”

“My goal, in all my work,” says Bill Zimmerman, creator of MakeBeliefsComix.com, “has been to create a safe place for people to tap into their imagination to discover new ways to express…their sense of humor, their writers’ voices, their ideas and concerns…and to have fun.”

Paul Wisenthal is a Pulitzer Prize nominee and award-winning writer based in New York City. An expert on alternative educational programs for at-risk youth, his work appears in The Huffington Post, The New York Times, Newsday, and USA Today.