By Paul Wisenthal on THE ATLANTIC

AN UPTICK IN SPECIAL-NEEDS DIAGNOSES AMONG STUDENTS HAS LED EDUCATORS TO TURN TO AN UNLIKELY SOURCE FOR SOLACE. 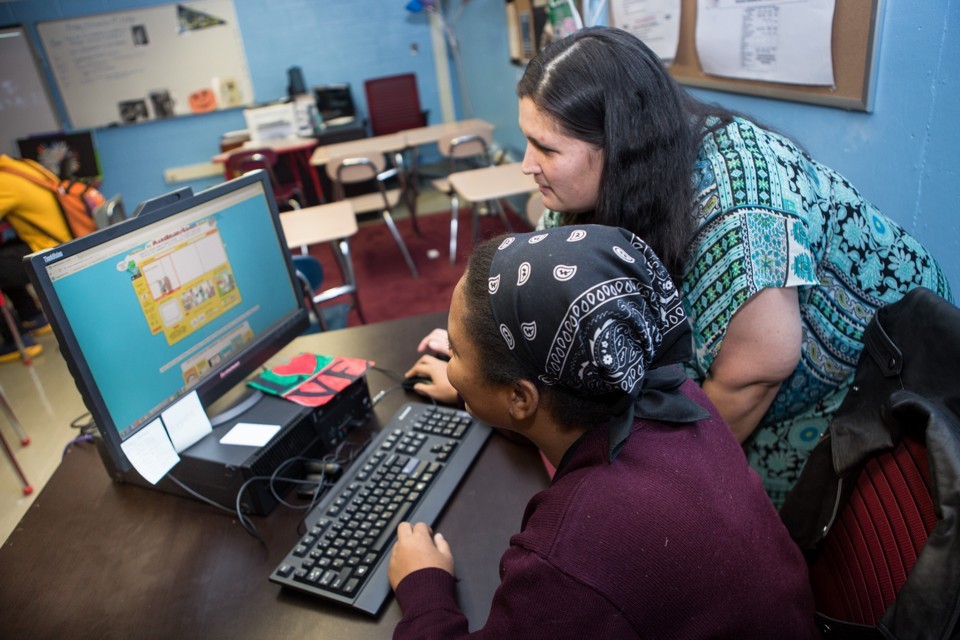 Jasherah Nalls, a student at The Urban Assembly Bronx Academy of Letters, and the teacher Lauren Fardig-Diops using the comic strips from Make Beliefs Comix.

Mostly serving generations of families living in one of numerous high-rise public-housing projects or homeless shelters dotting the area, The Urban Assembly Bronx Academy of Letters, a New York City public high school, sits in the country’s poorest congressional district. Recently, The New York Times cited the city’s 40th precinct as having the highest murder rate in the city, but where there are the fewest detectives per violent crime. To get to their school, these three teens must also walk through a neighborhood that includes two methadone clinics.

According to the city’s Department of Education, roughly 29 percent of the academy’s 600-member student body is classified as special-needs students. Many, including Jeremiah, Jasherah, and Paula, suffer from high anxiety, bouts of anger, teacher defiance, and serious behavioral problems generated by the volatility and poverty of their home lives. In this school, and others I have written about, more and more educators are relying on popular online comic creators such as Make Beliefs Comix and other digital teaching tools to address disruptive behaviors and serious academic challenges.

Deep within the school’s third-floor recesses is a special room managed by Lauren Fardig-Diop known as the PASS room (Positive Alternatives to School Suspension).

Lined with colorful, floor-length curtains; comfortable chairs; tables; computers; and a glowing campfire projected onto a large screen, students can safely detox from their pent-up emotions. Upon a student’s arrival, Fardig-Diop or one of the deans will perform immediate triage including a one-to-one debriefing and a written report for school records. Twenty-five to 30 students are dispatched daily to Fardig-Diop’s room, mostly for classroom behavioral issues—visits that for some might last the whole day.

There, kids can engage in activities designed to support their social-emotional well-being, such as art, yoga, and meditation. But they also get access to another, less-conventional therapy tool: As an incentive for good behavior, and in an effort to strengthen their communication skills and readjust their problematic behavior, Fardig-Diop rewards the students with an introduction to Make Beliefs Comix, along with other online games and activities.

Fardig-Diop started incorporating Make Beliefs Comix into her lesson plans after receiving training at the University of Michigan’s School for Education on the use of digital comics. A large and popular comic-generating site visited by over 2 million people last year, according to site leaders, Make Beliefs Comix won a Parent’s Choice award and endorsements from the American Library Association, UNESCO, and Google. 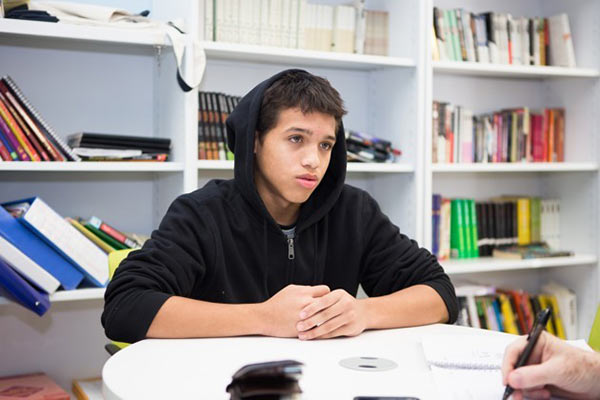 Fardig-Diop says it’s an effective tool to manage classroom behavior and serious learning issues. Three years ago, she introduced the site to her special-needs students; the idea was that by making comic-strip stories using the site’s comic strips and printables, they had a way to communicate their ideas and emotional issues.

Jeremiah, Jasherah, and Paula began to redirect their anxieties and fears into vibrant comic strips. Created by the best-selling children’s author Bill Zimmerman, Make Beliefs Comix—with its comic-strip-making section complemented by the site’s printables and hundreds of writing prompts—helped Fardig-Diop inspire her students to tell their own stories, identify and recognize their pent- up feelings, and empathize with others in highly social, reactive situations.

“The PASS room is like a second home to me,” said Jeremiah, who’s been suspended numerous times for emotional outbursts and wandering into other school areas without permission. Considered a very bright and talented student by his teachers, Jeremiah hopes to go on to college. “At home I use Make Beliefs Comix comic strips with my younger brother. It helps me with my anger and calms me down a lot.”

“The comic strips showed me how to see art in a different way” and “sparked a serious interest in drawing,” Jasherah said. “I struggled with anxiety and low self-confidence. Now, I feel more grounded and self-confident in myself.”

According to Fardig-Diop, the program also improved Jasherah’s interpersonal skills, helping her become more assertive in the classroom and reduce her visits to the PASS Room.

Last year, after Paula was having a hard time deciphering the text of Arthur Miller’s play, The Crucible, Fardig-Diop, then her 11th-grade English teacher, stepped in to help her apply her passion for creating comics and her love of art to better understand what she was reading and to express her ideas.

Paula struggled with bouts of anger and defiance in class and risked failing her English class; her learning and behavioral problems seemed to be leading her to join other school dropouts. “The comic strips helped me figure out what I wanted to say when I struggled with the words,” she said.

The number of young people diagnosed with learning disabilities is increasing, and roughly 20 percent of the overall student population has learning and attention issues, according to the National Center For Learning Disabilities. Meanwhile, Medicaid and education funding for these students faces drastic cuts. Because of these trends, Michael Bitz, an educator and the founder of The Comic Book Project, expects more teachers like Fardig-Diop to adopt free or subscription-based educational comic websites like Make Beliefs Comix in their classrooms.

The Comic Book Project is one of the nation’s first collaborative experimental studies of comics as a classroom tool. Working with Columbia University’s Teachers College and New York City schools, Bitz studied an after-school program serving low-performing fifth- through eighth-grade, many of whom spoke limited English. As part of the program, the students made their own comics to improve their literacy. The study, published in The Journal of Adolescent and Adult Literacy, found that 86 percent of the 675 students surveyed saw their writing improve. And more than 90 percent of the 34 instructors saw an improvement of their students’ reading, writing, and critical-analysis of written text. The report further showed that the comic project helped the students improve their listening and speaking, motivating them to take a more proactive role in class participation. It also gave the participants a better understanding of the writing process. 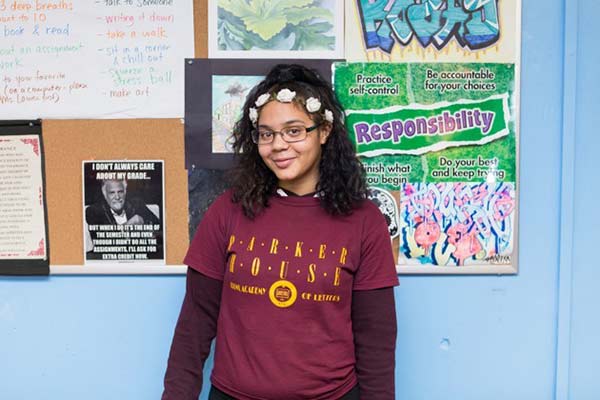 According to Neil Cohn, author of The Visual Language of Comics and an assistant professor at Tilburg University in the Netherlands, comics tap into fundamental aspects of human cognition. “They reflect a natural multimodal method of expression, which optimizes communication,” he said, acknowledging that there is very little published data on the application of comic generators as teaching aids.

A growing number of academics, including Cohn; Brent Wilson, a former Pennsylvania State University professor; and Jun Nakazawa, a professor at Chiba University in Japan, have conducted studies on how kids’ brains understand comics, how they draw comics, and their emerging role in classroom education.

In the next few years, Cohn expects several universities to publish their studies on the impact of digital comic generators in the classroom. Since 2006, when Make Beliefs Comix launched this first digital comic site, almost 20 new digital comic educational sites have been launched.

This research trend corresponds with the growth in comic-generator sites.“More and more teachers are capitalizing on the influence of popular comic culture giving their students the visual materials to represent their own world,” said Dr. Karen Gavigan, an associate professor in the School of Library Science at the University of South Carolina and a national expert on comic resources in school. Gavigan, who co-authored Connecting Comics to Curriculum: Strategies for Grades 6-12, also works with incarcerated youth from the South Carolina’s Department of Juvenile Justice (SCDJJ). 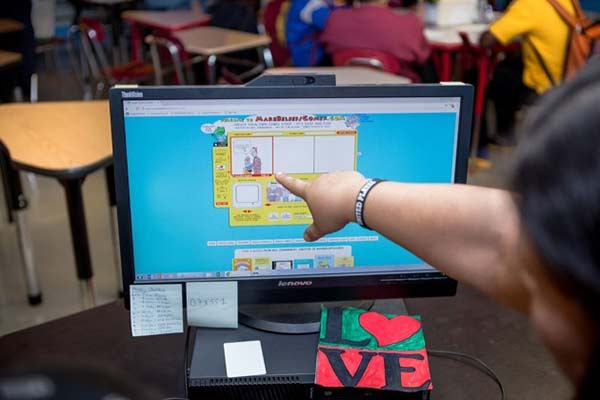 Many of the students at the SCDJJ are diagnosed with learning disabilities. “These adolescents were highly engaged when they participated in activities using comic sequential art,” she continued. Gavigan predicts that more schools faced with serious budget constraints will capitalize on the use of Make Beliefs Comix and other free comic-generator sites as effective teaching tools for teachers.

Indeed, new comic-generator sites continue to crop up. Last year, a teacher colleague of Alicia Parker introduced her to Storyboard That. Working with nine special-education students at Marlowe Middle School in Illinois, 50 miles north-west of Chicago, the site helped Parker’s mildly autistic students organize their vocabulary and converse with classmates. “It is very effective helping push these talented students back into regular classrooms,” she said.

With several different comic layouts available to help organize thinking and presentation, teachers create differentiated instructional plans based on a student’s ability. Both can create comics, social stories, summaries, and scientific explanations by blending images and text. According to the tech entrepreneur and Storyboard That president and founder Aaron Sherman, the site drew over 1 million visitors monthly during October and November of 2016, with 75,000 teachers using the site over the past year.

Sharon Eilts, an educator in Sunnyvale, California, who’s taught special education for 40 years, uses digital comic generators in her classes three times a week. “It lessens my students’ stress levels by using comic characters they create and are comfortable with,” she said. One of her students, a 12-year-old with autism, wrote about how she felt being different and being teased by other kids for the music she liked. “The comic strip helped her to communicate her feelings and I was able to notify her other teachers about the incessant teasing she endured,” Eilts said, noting the technology has also helped another one of her students, a 12-year-old who has cerebral palsy, become high-functioning and able to participate in certain regular classes.

Hunter College, part of the City University of New York, offers a nationally recognized teacher-education program for learning disabilities. Graduate students in the college’s School of Education work one-on-one for a year with a special-needs students teaching K-12 language arts, writing, and math. The school already uses graphic novels in its programs, but David Connor, a professor of special education and learning disabilities at CUNY, is also eager to introduce Make Beliefs Comix and other comic generators because of their appeal to struggling learners. “Using them is a practical way to engage students.”

But not all educators are convinced that comic generators are a quick fix for classroom instruction, especially when it comes to the special-needs population.

“My teachers-in-training must not regard these new technology tools as magical creations that can replace well-considered instructional strategies in the classroom,” said Jeff Stanzler, a professor at the University of Michigan. “It’s a generational thing. Younger teachers are more prone to embrace new technology while the seasoned veterans will require more training, support, and persuasion.” 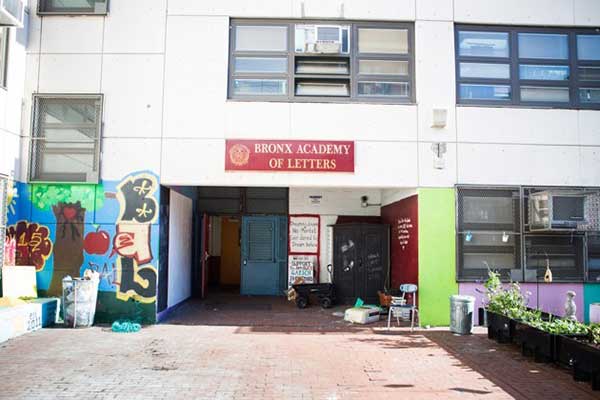 Will digital comic generators be enough for Jeremiah, Jasherah, and Paula to get them into college and break the cycle of poverty that afflicts much of the student population?

With over 170 students with learning disabilities still crammed at the Urban Assembly Bronx Academy, Principal Brandon Cardet-Hernandez projects that the Bronx Academy will have an 85-percent graduation rate, surpassing the city’s current average of 65 percent. He expects that Jeremiah, Jasherah, and Paula will graduate and go onto college.

“These digital sites are effective tools to incentivize our special-needs students to become active participants in their own education,” the principal said. “It’s also another way that we cultivate high-interest educational opportunities and redefine what learning looks and feels like.”